Please visit the sponsors helping to bring back the Gyronaut X-1.
If you are looking to help sponsor this historic motorcycle, please contact us for more information... 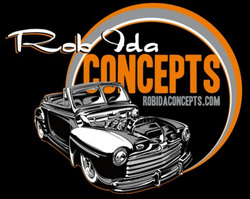 A huge THANKS to Rob Ida and his team for recreating the missing pieces to the Gyronaut and for restoring and repairing the remaining original fiberglass that survived Bob Leppan's 1970 crash.  The talent at IDA Automotive is unparalelled as can be seen in their many award-winning creations.

Added into their passion for all things Tucker is the talented flesh and blood from Preston Tucker's own great grandsons, Mike and Sean Tucker.  Just as Alex Tremulis helped out with Preston Tucker's desire for the most revolutionary post-war automobile design, now the Tuckers are helping bring back Alex's vision for the most radical land speed motorcycle.

The circle of life continues through 4 generations of Idas, Tuckers and Tremulis'...

Michigan's finest dealer of Ducati, MV Agusta, Aprilia, Moto Guzzi, Piaggio and Vespa from the man who built and drove the Gyronaut X-1 into the record books, Bob Leppan, lifetime member of the 200mph Club.  For all your biking needs, there's no better service than at TT Motorcycles.

For the Gyronaut X-1, Bob Leppan and Jim Bruflodt chose only the best in Amal's GP carburetters and their ultra-reliable "Matchbox" remote floats.  The same GP carbs that powered the Gyronaut to its World Record are still being produced today.  Come see the rest of Amal's vintage products as well as their latest technology.   The Gyronaut's choice for its records and successes.

Thanks go to the dedicated folks at Amal for offering their in-house restoration services for the Gyronaut.

A special thanks to Boys of Bonneville's Curt Wallin and John Greene for bringing the Gyronaut story to film.

Boys of Bonneville: Racing on a Ribbon of Salt is about an America that has all but disappeared, when lucrative business deals were cemented by a handshake and state of the art automobiles were designed on the backs of envelopes. It tells the story of an unsung hero and self-made man, David Abbott Jenkins, who, with almost superhuman stamina and boyish charm, set out to single-handedly break every existing land speed record on his beloved Bonneville Salt Flats of Utah.

If it had wheels at Disneyland, Bob Gurr probably designed it.  The Monorail, Haunted House, Submarine, and people movers were all his creations.  Alex Tremulis hired Bob at Ford and the two became lifelong friends.  His new book, Just for Fun, describes his process for some of his most famous designs.  Thank you, Bob, for your participation and assistance in the Gyronaut X-1 restoration documentary.

Syd Mead is one of the foremost experts on visualizing the future.  Ford's Gyron two-wheeled show car was one of his creations.  His works can be seen in such legendary movies as Blade Runner, Tron and Aliens.  But he has done so much more to spark our imaginations with his crystal clear view of what life could look like in the next millenium and beyond.  Thanks, Syd, for all your help with the Gyronaut documentary.

Ron Jones is a mechanical engineer with diversified experience in automotive engineering design and project management.  He worked with Alex Tremulis on Subaru's Gyronaut X-100, a 100 miles-per-gallon three-wheeled streamliner from 1980.  Ron built the chassis for the vehicle and became friends with Alex in the process.  Thanks, Ron, for all your insight into what it was like to build such an amazing car with Alex.

Accidents happen. Wouldn't it be nice to have the peace of mind that comes with a Chubb Collector Car policy? We offer options and choices that many others don't. Agreed Value, up to $3,000 for losses to trailers, your choice of body shop, and automatic 30 day coverage for newly purchased classic vehicles are just a few of the benefits.

Triumph Motorcycles has always had its own distinctive character and a history of creating motorcycles that become design classics.  And we’ve not lost that touch – the inspiration and engineering passion that birthed the iconic Triumph Bonneville of the 60’s has today created bikes like the stunning Rocket III and the unmistakable Speed Triple.

Back in the day, Bob Leppan asked Wild Bill to letter and pinstripe the Gyronaut.  Well, he's still around, still at it, and better than ever.  The plan is to reunite him with the Gyronaut to recreate his work almost 50 years ago!

Wild Bill and Associates, fine lettering and design by The Gold Leaf Specialists.

A big THANKS to Terry Nish for loaning his magnificent garage for a couple days of filming.  The Royal Purple/Nish Streamliner provided a perfect backdrop for the Gyronaut documentary.  With a build quality that is second to none, it's only a matter of time for Frankenstein to rise again...

Although not an official sponsor for the Gyronaut, without them there may be no salt for the Gyronaut to return to.  Save The Salt is a Non Profit Organization focused on preserving the history, legacy and future of the Bonneville Salt Flats in Utah.  Our core mission is to advocate the Salt Flats as a natural wonder and to promote responsible use. We are comprised of various groups (Save the Salt Coalition) to keep the Salt Flats available for generations to come.  Find out how you can help...

Thanks to MidAmerica Motorcycle Auctions and Ron Christenson for bringing the Gyronaut to the Pebble Beach Concours d'Elegance for 2012.  What's more appropriate company for the World's Fastest Motorcycle from 1966 to 1970 than to be alongside Jim Morrison's bike and Steve McQueen's rides?  Thanks for the invite!

Although not an official sponsor of the Gyronaut, the SCTA sponsors "Speed Week" each year.  The SCTA is an all volunteer organization comprised of twelve individual clubs. Our mission is to provide safe and friendly Land Speed Racing (LSR) events for racing enthusiasts in both Southern California; at the El Mirage Dry Lake; and at the Bonneville Salt Flats in Utah. There are typically six events each year (May-Nov) at the El Mirage Dry Lake, and two events each year at the Bonneville Salt Flats (Speed Week and World Finals) weather permitting.